This search form uses an instant search feature. As you type, search results will appear automatically below the search field. When you've entered you desired search terms use tab to navigate through the available results and hit enter to open the selected page or document.
EDIT MAIN

Looking across EHOVE Career Center’s campus today, it may be difficult to imagine the grounds without the numerous buildings, plantings and pond that are a part of the current landscape. But for many years prior to EHOVE’s opening in 1968, the 125 acres of ground could be seen as just another country farm located in a rural setting near Lake Erie.

The development brought on by the construction of a major thoroughfare in the 1950s, along with changing educational requirements and industry need, shaped the future of vocational education in the Erie, Huron and Ottawa school area.

In 1960, the Ohio Turnpike had been completed for five years and other roads of Interstate Highway System were well underway. With some 10 million cars and trucks traveling the Ohio Turnpike in 1956, it was evident that even more growth was on the way. Correctly surmising that increased economic development would demand a pool of trained workers, Ohio government officials began planning for vocational training through the public school system.

Their mandate was fueled by the requirement that funding of public schools was contingent on their offering students a minimum of 12 vocational units, an obligation many districts failed to meet at that time.

In 1965, the EHOVE Board of Education and a 21 member steering committee were formed to study the feasibility of creating a vocational training center in the Erie, and Huron County area. When Ottawa County joined the district, locating the school became critical so as to even out the commute among all associate schools.

After much debate, the name for the jointure was decided as EHOVE. The acronym for Erie Huron Ottawa Vocational Education was a historical nod to the local Indian tribes that predated European settlers. EHOVE was the third vocational jointure in the state, after Springfield Clark in Dayton and Penta County in Perrysburg.

Leading the charge to generate interest, create curriculum and stump for a building levy for EHOVE were three visionary men hired by the board:

James A. Rhodes, the 61st and 63rd governor of Ohio (1963-71, 1975-83), was instrumental in pushing through several reform measures that would have far-reaching effects on education and industry. Along with industry, he considered providing jobs for all employable workers and training them to qualify for the available jobs, to be one of the primary functions of state government.

To that end, a constitutional amendment approved by the voters in November 1968 provided for the issuance of $779,000,000 worth of bonds, including $100,000,000 for vocational, technical, and higher education and juvenile rehabilitation.* EHOVE had the opportunity for 50/50 in matching state funds, prompting the board to put a 1.5 mill bond issue on the ballot to start the building fund.

As EHOVE took initial planning steps, there were few schools to pattern themselves after or imitate. It was decided that a campus style layout with several buildings would invoke a feeling that EHOVE was a prelude or pre-college institution. Every building was to be self-operating so that the noise element wouldn’t bother students in different disciplines.

Furthermore, if one building had a utility failure, it didn’t necessitate a campus-wide shutdown. With gasoline at 33 cents a gallon, the concern for energy efficiency was not paramount and buildings were designed with spacious hallways and many windows. The land, known as the Miller Farm, was purchased for $200 - $250 an acre. Approximately 285 students from associate schools enrolled in programs for its opening year, 1968.

Administrators debated course offerings and decided to start with 20 – 21 programs, a great increase from the two or three programs students were offered at their associated schools. At that time EHOVE offered students just three academic courses.

Groundbreaking in the fall of 1967 was followed by a harsh winter that delayed construction on D building (slated to house the large mechanical programs, such as Auto Mechanics, Auto Body and Agricultural Mechanics), the first structure administrators planned to have open in fall of 1968.

Although all staff had been hired before Labor Day, there was no running water on campus and the windows had yet to be installed. Staff signed on for security patrol shifts to make watch over the vast amount of equipment and supplies located in doorless buildings.

Associate school administrators were concerned because EHOVE students were sitting at home due to construction setbacks. At that time, many generous offers of temporary teaching space were offered and students were bussed to the following locations in Monroeville, Norwalk and nearby NASA.

When the first class was brought to campus on September 22, 1968, C building housed a makeshift vending cafeteria near the Electronics Lab and outdoor lavatories were used until a water line could be built from the US 250 water main.

The subsequent construction of Buildings A, B (Office and Business Training) and F (Technical Education) went quickly as they were bid by another firm. E Building was constructed when Bellevue became a member of the jointure in 1972, using back tax money the district would have been contributing had it originally joined EHOVE in 1965. The school warehouse was built in 1980.

EHOVE Career Center pioneered many new programs in the early days, one of which was the Farm Management in which students could farm existing acreage around EHOVE. The program had its own Development Corporation so that it could practice farming in the truest sense. The class could borrow $10,000 - $15,000 from Norwalk Production Credit and buy supplies and equipment. The same equipment used on the farm, tractors and combines, was the same equipment used in class. 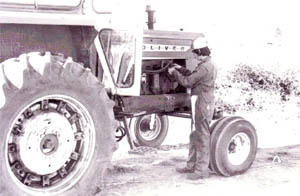 When livestock in the form of hogs was added, EHOVE’s program, located in Building H in 1980, was the only school in the state that offered the three stages of swine management program, from breeding to farrowing. Bringing livestock to campus opened a host of other considerations for EHOVE. Who would take care of the animals on weekends and vacations? It was decided then in 1984-1985 to add the Welcome Center to give the school 24 hour security. Administrators decided against staffing with uniformed personnel so that the EHOVE campus would have a friendly feel. 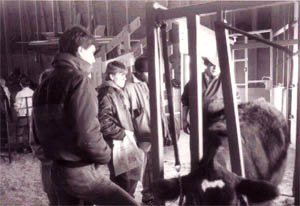 When, the Resource Conservation program was started in 1972, the Retention Pond was built. Due to construction, Mason Road became flooded during heavy rains. The Retention Pond was a solution to the problem and the area could be used for recreational purposes as well. The Future Farmers of America student organization donated $2,500 from their fruit sale fundraiser, matched by a school improvement grant. The carpentry class built a shelter house and a big dirt hill blocked the high west winds and this provided for winter recreation. The hill was also used for prairie grass experiment.

After years of discussion and extensive research the EHOVE Board of Education broke ground in the summer of 2013 on a renovation and construction project to expand and enhance the campus career tech and academic facilities. The goal of this project was to provide our high school and adult students the most up-to-date learning environment in the timeliest and most economical means possible for taxpayers.

Each day, over 800 junior and senior high school students in the EHOVE Career Center area tune in, travel to, or connect with the career center from 16 associate school districts.

Students earn a diploma from their home school along with a certificate of completion from EHOVE.

EHOVE Career Center endeavors to give high schools students the jump on further education or careers by offering the chance to earn career-tech skills and a number of industry recognized certifications before leaving high school.

Many programs (in addition to Tech Prep) offer articulation agreements with area colleges allowing students to transition easily to the college setting.

The Following are Part of the EHOVE Advantage:

Bring Up Grades - B.U.G. Program
An extra help program is built into the daily schedule so students don’t fall behind.

Articulation Agreements
EHOVE partners with at least 20 institutions of higher education so that students can receive credits for their high school work when they enroll for further training .

Higher Education
EHOVE students, at a rate of 61%, continue on to college or higher education after completing their high school program.

Summer Jumpstart
Students earning good grades and attendance during their junior year are eligible to participate in this program which matches them up with an employer to gain further skills during the summer prior to their senior year. Many of these students continue to gain on the job skills with the same employer throughout their senior year.